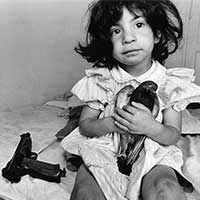 The most comprehensive coverage of Central America in years.

Award-winning radio to use as an educational and learning tool

It's been said that "On a worldwide scale it is the medium of radio that has been man's most potent communication innovation since the development of writing." Even in the age of the Internet, in most of the developing world, this remains true. This is the case in Central America, where rural and indigenous campesinos have endured decades of exclusion from the mass media. We call this next report: "Todas las Voces": "All of the Voices". In it we examine the phenomenon of community radio in Guatemala, where the peace accords signed in 1996 created great hopes of change, that long excluded Mayan communities will now participate in the world of media.

After decades of exclusion from the mass media in their countries, indigenous people and other rural campesinos in Central America are beginning to gain access to the media, especially through the medium of community radio. So perhaps it is no surprise that in negotiating the 1996 Guatemalan peace accords, the Mayan intellectual Demetri Cojti Cuxil made this demand: "...each Maya community must be able to organize its own radio station, and participate in television production." Our report looks at progress made in this direction over the last six years in Guatemala--including the flourishing of hundreds of pirate Mayan language community and religious stations, as well as barriers to media access.

For more information about the issues raised in the segment Todas las Voces: Media After the Peace: Community Radio In Guatemala, see the following books and articles.
(Note: this is not intended as a complete list. Check back for more recommendations and an opportunity to make your own recommendations soon.)

Brintnall, Douglas E., Revolt Against the Dead: The Modernization of a Mayan Community in the Highlands of Guatemala.
New York: Gordon and Breach, 1979

Gardner, Mary A. The press of Guatemala
Association for Education in Journalism, Lexington, Ky., Journalism monographs (Austin, Tex.) no. 18., 1971

McAnany, Emile G., The Role of Information in Communication with the Rural Poor: Some Reflections
In E.G. McAnany., Ed., Communciations in the Rural Third World
Praeger Publishers, New York, 1980

Moore,Don, "The Sociolinguistics of Guatemalan indigenous Language and the Effect of Radio Broadcasting."
Unpublished ms., 1989

and the Fund for Investigative Journalism.